The NYT story is utterly horrifying in what it reveals about the callous treatment of individual animals–from hormone injections to spur growth to selective breeding for greater litter sizes to abandoning unwanted babies and allowing them to die. And much, much more. As the article states:

Pigs are having many more piglets — up to 14, instead of the usual eight — but hundreds of those newborns, too frail or crowded to move, are being crushed each year when their mothers roll over. Cows, which normally bear one calf at a time, have been retooled to have twins and triplets, which often emerge weakened or deformed, dying in such numbers that even meat producers have been repulsed.

Then there are the lambs. In an effort to develop “easy care” sheep that can survive without costly shelters or shepherds, ewes are giving birth, unaided, in open fields where newborns are killed by predators, harsh weather and starvation. 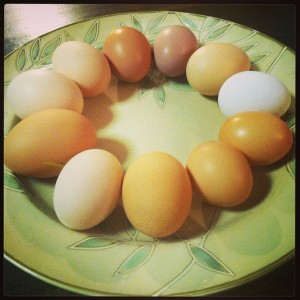 One days’ worth of eggs from TCA hens = the number of eggs laid per year by their wild ancestor.

The reality of the situation is that these obvious tortures are not restricted to “factory” farming; they are inextricably connected to every farmed animal, no matter where they are living or how they are treated. All farmed animals grow at certain rates (like the “broiler” chickens raised for meat who are killed at six weeks old, long after they have become crippled by their own bulk), have certain numbers of babies, lay a certain number of eggs–all as a result of human manipulation–through selective breeding and more invasive genetic tinkering.

The resident hens at Triangle Chance for All are perfect examples. Each one of them will lay between 250 and 300 eggs per year, unlike her wild ancestors, who lay between 10 and 15 eggs per year. All domesticated hens are victims of their own hijacked biology, and most will die well before their time because of this. In the case of other animals, their premature deaths typically come at the hands of a human–either because their flesh is desired or their productivity (and thus their usefulness) has waned.

We can try to stave off this death, but there is only so much we can do. The only true way to stop the suffering of future generations is to go vegan and end the demand for ALL animal products, and if possible we can liberate animals from the oppression in which they live. But by going vegan, we take a huge step away from this endless torture by ending the demand for the altered, exploited bodies of the mothers, fathers, sons, and daughters.

We ate this soup from thermoses after our long drive to The Pig Preserve, and it was warming, filling, and comforting. It is the perfect winter’s meal.

Add all of the ingredients except salt and pepper to a big soup pot, and bring to a boil. Turn the heat down to a simmer, cover partially, and cook until the peas are soft and falling apart. This will take at least an hour. Add more water or broth, if needed. Add salt and pepper, and serve.